1. Joshua Stanton’s analysis of Sino-North Korean relations on One Free Korea is stuffed with things worth thinking about.  Of course, when he equates the Global Times with the Nazi organ Voelkische Beobachter, I, speaking as someone who actually reads the Global Times (usually in its Chinese version, not through partial characterizations of articles by Reuters or AFP or South Korean papers) as well as a sometime reader of the old Voelkische Beobachter in the Nazi archives (where I’ve been getting my hands dirty all last week), find Joshua’s comparison to be gratuitous.

Do you find it at all strange or frustrating when people beat up on China for what it publishes in Global Times/Huanqiu Shibao when those same people are unable to provide so much as a link or an article title?  I think it stretches credibility as much as it undermines the old humanist ideal of ad fontes, taking the truth from the sources themselves.  Time for a Reformation of sorts, led by the mere 20,000 non-ethnically-Chinese Americans who speak Mandarin and read Chinese characters!  Or we could just continue to rely on Chris Buckley’s expertise for Reuters in Beijing.  After all, isn’t that what our foreign correspondents are for, anyway, to do our reading for us?

2. It appears that North Korean border guards have killed another two Chinese nationals, this time near Musan, a mining town directly on the Chinese border.  Here’s a photo of the city I took last year (click image for links to my other Musan posts): 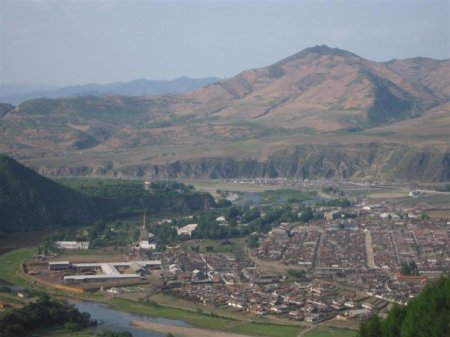 The dark green side with the vegetation is China; the arid, clear cut side is Musan.

3. June was a pretty dead month on the website of the Chinese Embassy in Pyongyang, but on June 30, the Chinese Ambassador visited a Sino-Korean agricultural company, apparently outside of Pyongyang (link in Chinese, but interesting photos).  Oh yes, there was also singing and dancing, a must for any act of socialist friendship, even here in Germany, where some North Korean students from Kim Il Sung’s alma mater (1923-1925, see link), apparently came to win math competitions.

4.  Good Friends, the Buddhist organization in Seoul, has finally gotten out their reports for the month of June; one account however, is being disputed by the Daily NK’s inside sources.  An interesting test case for defector testimony veracity, something to think about as in this article in which the Daily NK, sourcing Radio Free North Korea, reports that “anti-Kim leaflets” have appeared in Hoeryong, another significant border city in North Hamgyong province. Again, it makes you wonder.

5. KCNA, the North Korean news agency, reports that Chinese media delegations were in Pyongyang, and that  “the performance goes on” in Sinuiju of a mobilizing play about the Chollima era (imagine that you’re nostalgic for how great things were in the 1960s in North Korea — it’s quite a commentary.   KCNA further reports that the border city of Hyesan has enjoyed some new construction recently, of an anti-Japanese martyr’s monument and cemetery, that is.  Hyesan is already studded with these kinds of things, but, as Kim Jong Il was recently there, it’s clear he continues to focus on monument building in equal or greater measure than economic development.  This piece lumps the DPRK in with China as targets of US nuclear threats in the 1950s.  And don’t miss this piece:

The song encourages the servicepersons and civilians to the struggle against the U.S. imperialists and the south Korean puppet regime.It was played by the band in various events, including a Pyongyang army-people rally and revenge-vowing meetings of working people’s organizations, held on June 25, the day of the struggle against the U.S. imperialists”.

Reflected in the song is a strong will of the Korean people to always keep themselves ready for action and decisively frustrate the reckless war provocation moves of the U.S. imperialists and the south Korean regime of traitors.  It also contains the idea that the Korean army and people, led by General Secretary Kim Jong Il, will surely emerge victorious in fight with the U.S. imperialists.

And here we have more proof that the Sinuiju Student Incident of 1945 is on the mind of the present regime in Pyongyang.  If you haven’t read my bio lately, I’ll immodestly remind you that co-author Chuck Kraus and I appear to be the world’s foremost experts on that crucial and unique moment of open rebellion in North Korea, at least until someone surpasses our account of the Incident published in 2008 in Journal of Korean Studies at Stanford.

6. This KCNA article is a subtle refutation of the story that China has turned its back on North Korea’s version of the history of the Korean War.  These meetings in Shenyang are rarely reported in the Chinese press, which makes you wonder if this is something that happens in the North Korean consulate in that city.   But this is a very curious and interesting piece.

7.  Finally, don’t miss this collection of stories from London Korea Links, a great site which not only cites Sinologistical Violoncellist but includes some beautiful photos and has this priceless comment:

As if everything to do with North Korea isn’t depressing enough, Mount Baekdu will erupt in the next few years. http://bit.ly/9WVVgO

Happy Independence Day, America!  Last year I celebrated by grilling some fish and swimming with some Chinese cops and their families and my crazy friend Bang Zi in Ji’an, a little city with ancient Koguryo tombs just on the North Korean border.  And North Korea was so kind to reciprocate by testing rockets then!  So today seems sanguine as I witness the long aftermath of Germany’s football victory yesterday (screaming the lungs out in nationalistic fury for an adopted motherland, once again experiencing that odd German duality of total joy in the present while standing on the site of commemorated and unthinkable atrocities)….So today it is on to tilling intellectual fields in Berlin and thinking about Korea.  I’m landing in Seoul — that other bifurcated land — in less than 48 hours, so may be silent on the blog front for a bit.