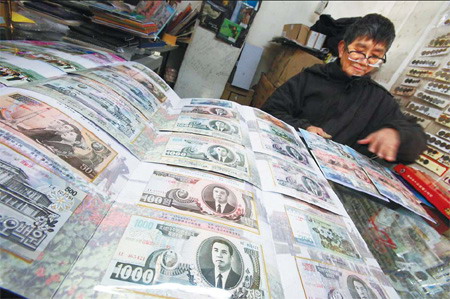 North Korea’s long border with the People’s Republic of China is often seen as a permeable membrane for the movement of people and goods — in other words, as a conduit for smuggling. The movement of DVDs, USBs, and illicit drugs seems to get the most press (although North Korea is also involved in legal enterprises in China). Just as important than such illegal activity, if not moreso, to the ongoing functioning of the modified economy of the DPRK is the movement of Chinese yuan into North Korea.

Chris Green has emerged as one of the foremost experts on this very subject. In a recent podcast with Kurt Achin, he delved further into the topic, starting the conversation off with a historically-informed exploration of the North Korean currency itself. In the case of North Korea, does a cosmetic change yield policy changes? What does the state fear from an influx of foreign currency?  This podcast gives a great deal of insight into the matter.

Further on currency shifts: When I was in the PRC’S Yanbian Korean Autonomous Prefecture earlier this month, the Yanbian Chenbao (延边晨报 / Morning Post) reported that two rural banks would now be trading in ROK won as well as rubles, and that South Korean-Russian transactions in the region could take place in won or rubles, rather than the US dollars that had previously prevailed. These ‘cultures of liquidity’ on the northern frontier of North Korea seem primed to expand further, and may have yet more impacts on the politics of foreign currency in the DPRK.