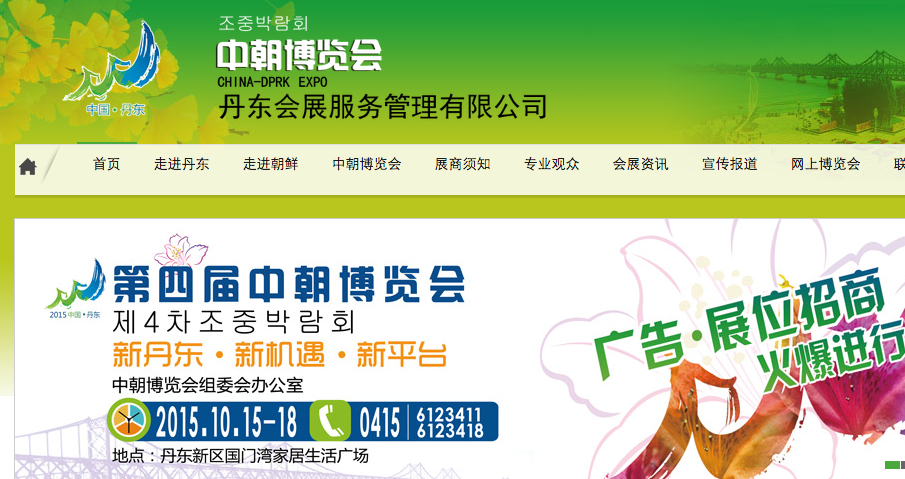 Historians have surely seen better days between the Chinese Communist Party and the Kim-centric Workers’ Party of [North] Korea, but business continues apace today in the borderland. The main item seen in the past few weeks (i.e., something “new” that hasn’t yet made it yet into our wonderful Anglophone discourse) is the subject of today’s post. And the news is that the China-DPRK Trade Fair and Culture/Tourism Expo will indeed be held this coming October, and is entering its fourth year. The Chinese website for the event, without much irony, uses the same slogan as in previous years (fairs and slogans analyzed here in an English essay for the Korea Economic Institute), and offers page after page of discussion of the Korean minority in China under headings that actually promise “enter North Korea.”

Discussing the Dandong Trade Fair puts one into the zone of perpetual risk. After all, it is tempting to engage in overreading any single piece of data which may confirm or deny an assumption that the North Korean regime is tending toward economic reform and opening up.

Dandong: Is Kim Jong-un the great modernizer, each moment of exchange with China an irrevocable step forward toward North Korean marketization? Or, is any North Korean participation in an event like the trade fair in Dandong just a feint toward outside public opinion, so that South Korean companies will at least openly consider moving to Hunchun to get around sanctions, so that Chinese comrades will not stop completely the clotted spigots of present investment and aid, so that Beijing will be somewhat less angry the next time a cruise missile nearly knocks down a regional jet flying from Shenyang to Japan, or a North Korean border guard goes AWOLWW (Absent without Leave, with a Weapon) into Chinese rural border communities of Yanbian whose youth have all already cleared out for the bright lights of South Korean’s labour markets?

Goodness knows these debates matter, because North Korea’s actual direction, and the methods used by China to harness, encourage, engage, and exploit North Korean participation in the Chinese economy and beyond are (or arguably should be) a huge part of the overall picture.

But enough of the framing; stuff has actually happened.

The going-forward of the 2015 fair was announced in Dandong at a hotel by the city’s vice-mayor; no North Koreans were listed as attending. Nor were any DPRK officials in attendance (you know, like a vice-mayor of Sinuiju, or perhaps even a governor or Party Secretary from North Pyong’an province, the kind of people Jang Song-taek used to bring with him.)

So this may yet another fine example of North Korea ducking anything remotely public to bang the drum for investors or domestic exporters, leaving the stage to Chinese officials who then do the heavy lifting — to the extent that such events require anything more than showing up, reading a bland statement of friendship or economic aspiration.

However, aspiration may be the wrong phrase; and local Liaoning officials trying too hard to create maximum change in the shortest possible time might attract distrust. What do I mean by that? The event will be held in the Xincheng district of Dandong, which itself is undergoing a bit of a scandal having to do with government mismanagement. Just across from the rather dead North Korean Special Economic Zone of Hwanggumpyeong, construction moved very quickly after Wen Jiabao’s pioneering visit to North Korea in October 2009. Since then, the pace has slowed significantly as it has become clear that the white elephant of a bridge stretching from the district into the wet and rural outskirts of Sinuiju would not be opening.

In a rather clear signal that the almighty Central Government in Beijing is unhappy with the administration of the new development district of Xincheng, Zhongguo Jingji Zhoukan (China Economic Weekly) magazine has put out a rather extensive look at land appropriation which really ought to be read by anyone worth their salt whose professional habits include deciphering Chinese receptivity to North Korea’s erratic economic strategy and China’s receptivity to it amid the unpredictable muddy tempests of the Yalu River estuary.