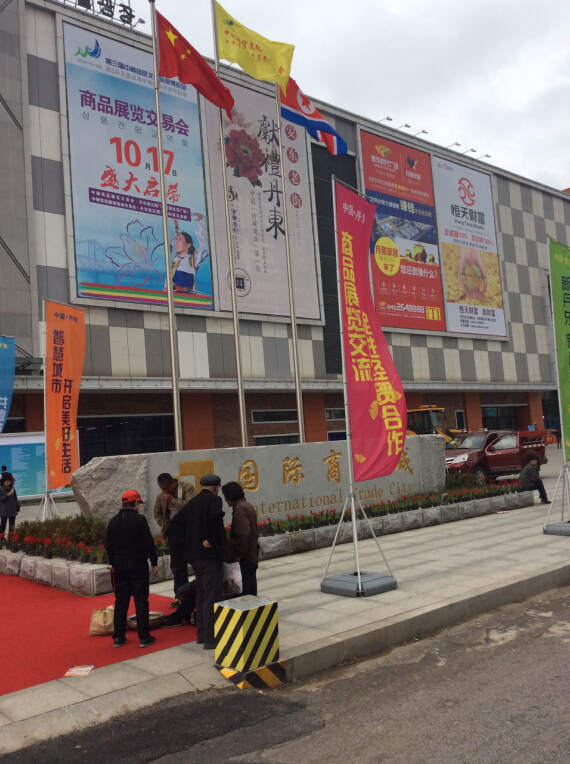 While analysts were surely right to parse the dynamics of the 3 September parade in Beijing, the work of assessing the state of Chinese-North Korean relations needs to go well beyond seating charts, personalities, and speculation about Kim Jong-un. As the main juncture for bilateral trade, the Chinese border city of Dandong should be near the top of any short list of generally verifiable factual indicators of Chinese-North Korean relations.

Synthesizing all the stuff going on in and around Dandong this autumn is in itself not a particularly easy task, but at least it has a center: A bilateral trade fair, the fourth such event since Wen Jiabao’s injection of mercantile stimulus in his 2009 trip to Pyongyang, is scheduled for 15-18 October 2015.  Due largely to North Korean state media’s own narrative propulsion, and a few satellite photos, journalists have shown little interest in Dandong of late, brandishing instead stories about possible missile launches, nuclear rumblings, and yet another abortive attempt to jump-start the Six Party Talks.

But if journalists were more focused on Dandong, which questions (breathless questions, of course) would they ask? Well, here are a few, along with a few tentative answers:

Q. Will North Korea’s planned launch of a missile on 10 October cancel the trade fair?  A. Almost certainly not.

Q. If China follows through on its implicit threat to North Korea and supports increased sanctions due to such a missile launch, and sanctions are the key to leveraging North Korea, and Dandong is the key site for shipments into DPRK, shouldn’t we be more interested in cross-border trade at Dandong? A. Yes.

Q. Is China totally stoked about the completed high-speed rail line which has cut travel times between the hulking industrial city of Shenyang and Dandong’s riviera to a mere 70 minutes? A. Yes.

Q. Has the North Korean state in any way acknowledged that the high-speed rail system exists on its periphery? A. Apart from the fact that Ri Yong-nam, the man ostensibly coordinating for economic cooperation with foreign countries, certainly heard about it in a 21 April dissertation on China’s “One Belt, One Road” policy by Ambassador Li Jinjun in Pyongyang, no.

Q. Is North Korea going to use the fair to announce further opening up of its northwest to Chinese tourism? A. Probably, and the DPRK actually sent a representative to a recent regional tourism conference which included both China and South Korea, but they’ve done this before and then closed the border, so keep expectations low.

Q. Will the Chinese Ambassador to Pyongyang be at the trade fair? A. Yes; it would be very strange if he did not attend.

Q. Will Kim Jong-un send a high-level envoy? A. Probably not, just like the North Korean musical ensemble sent (and there will be one) is not at all likely to be the Moranbong Band.

Q. Will China’s announcement of a new commercial zone in Dandong really “give North Koreans a chance to taste free markets“? Q. as A.  Hasn’t this “chance” existed already for a while now? And were any actual North Koreans involved in crafting or announcing this zone?

Q. Will the CCP local Dandong Party structure have recovered from a series of missteps and purges which threaten to rock it to its core? A. No, but we don’t know enough about the purges and what, if any, connection they have to cross-border trade.

Other threads to keep track of in Dandong include a highly publicized police bust of a foreign-currency operation in Dandong which appears to have been operated on a kind of Dandong-Shenyang-Seoul triangle, rather than being connected to North Korea. While the DPRK has managed to accrue reputation points as a “mafia state,” there are plenty of other up-and-coming dons in their neighborhood, some of whom simply surround North Korea with their illegal activities rather than interact with it. And speaking of illegal, don’t forget the real estate scandals on the Chinese side of the $300 million “bridge to nowhere” that will also be looming over the bright banners and slogans in Dandong.

Kim Jong-un, for his part, has at least gotten out of Pyongyang’s proverbial beltway twice in the past month, visiting Sinuiju and Rason, both important potential sites of Sino-North Korean interaction. I’ll have more detail about those visits (and what they do and do not mean for relations with China) in an upcoming podcast with Steve Miller in Seoul. In the meantime, for an overview of Party-Party relations between Beijing and Pyongyang, you can read my 27 August essay in The Diplomat or listen to the podcast with Ankit Panda.

Image: Hanging advertisements outside of the Guomenwan Home and Lifestyle Market, 29 June 2015.