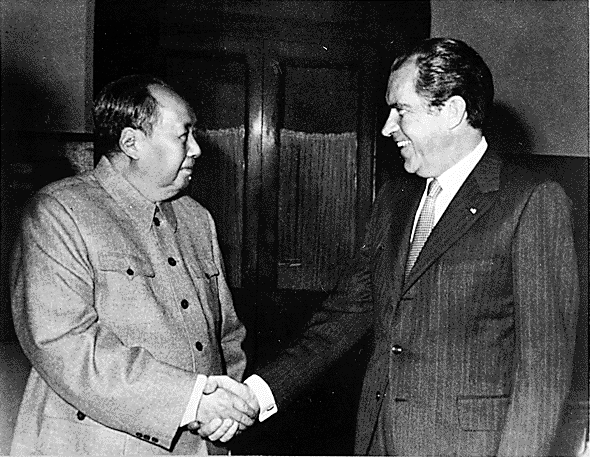 The Nixon visit was as clear a turning point as will ever arrive in diplomatic history, involving two of the world’s most important nations. The Nixon visit is a prism into talking about what had come before (the breaking off of relations in 1949), the crisis of the Cold War (inclusive of the Korean war), the Cultural Revolution, and what would follow – China’s “opening up.”  Additionally, students tend to be relatively more interested or fluent in Nixon than in other 20th century US presidents, and almost everyone is interested in Mao once they “get to know him.”

One point that is often lost in the discussion of the Nixon visit, however, is the fact that formal U.S.-China relations were finally and actually established in 1979. It’s often lost on students and even occasionally (non-Asianist) scholars who think Nixon’s visit led to normalization right away.  It isn’t necessary to get into some long discourse on Carter administration foreign policy to explain this, but given the heavy focus on Deng Xiaoping in the next phase of PRC history, more discussion of how 1979 finally came about or the long-term implications of the rapprochement never hurts. We need not turn our lectures into sunny advertisements for the pure capitalist delights of Dengist brilliance, but the 1979 turning point in Chinese history more generally merits greater discussion.