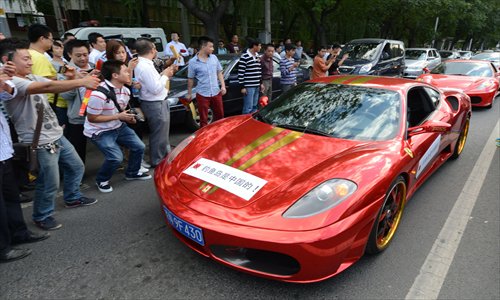 Peering up from the various forms of wreckage spawned by the United States — be it the lamentable state of transportation infrastructure, the gory aftermath of multiple-front wars in southwest Asia, international media coverage of police killings of African-Americans, or sequestration and the swaths of red enveloping the national budget —  the very notion of a “success story” of American foreign and economic policy today seems almost laughable.  Yet there it is: Japan.  Japan’s 125 million people and its massive industrial base together comprise the second-biggest economy in the world, serve as an important global trading partner and furnish the American government with a reliable — and increasingly essential — purchaser of U.S. debt.

In terms of foreign policy, the Japanese government has been a reliable American ally for decades, supporting U.S. military actions in Asia and around the world.  About 40,000 U.S troops continue to be stationed in Japan, where, apart from the occasional North Korean threat, no one tries to blow them up.  And in terms of culture, few countries wield “soft power” in the U.S. as well as the Japanese – computer games, cultural events, martial arts, manga, language study, and funding for scholars are all among the highly successful elements that add to positive perceptions of Japan among North Americans.

And so it is difficult to imagine how citizens of another country – China – which has access to the same cultural and economic bounty that is Japan, and shares deep cultural and linguistic ties, could feel so differently.  Japan’s popularity in China has evaporated, and in fact most Chinese youth have only negative views of their eastern neighbor.  Much of the enmity among Chinese youth toward Japan stems from the period from 1985-1945 when Japan extended its dominion into the Chinese imperium and republic, successively, using military and cultural implements to penetrate China’s markets, schools, mines, and forging railroads and factories.

In 1895 Japan severed Taiwan from the Chinese mainland.  For the next fifty years, the fertile island off the Fujian coast was transformed into an assimilated colony where Japanese, not Chinese, was the first language.  In 1900, Japanese troops joined forces with the United States and six other nations to invade and occupy Beijing, and five years later, Japanese armies coursed through northeast China in the process of handing Russia the worst military defeats in its modern history.  In 1919 at Versailles, Japan insisted on keeping chunks of the North China coast, triggering an awakening in Chinese culture and accelerating the move toward popular anti-Japanese sentiment among Chinese intellectuals in particular.

The war between China and Japan has many names and few points of consensus.  It is called the Second Sino-Japanese War, the War of Resistance, the Fifteen-Year War, and the China Incident, among others.  Within the conflict, names like “the Manchurian Incident” and “the Marco Polo Bridge incident” rise up like angry belches from a volcano of memory.  The most stunning is the “Rape of Nanking,” a painful historical episode that continues to wreak havoc on the Sino-Japanese relationship, and into which the PRC invests substantial historical stock.

When the government of the People’s Republic of China undertakes campaigns of commemoration, they are intense. Chinese televisions brim with tales of war, concert halls thunder with anti-Japanese songs, disc jockeys and cab drivers casually name-drop Unit 731, and officials hailing from Beijing — and Taipei — preside over solemn ceremonies. Reference to “Japanese fascism” becomes ubiquitous in China, and the atrocities of “the Japanese devils” fill magazines, newspapers, and a slew of newly published books.

On July 7, 2005, I was on the outskirts of Beijing when China commemorated the 68th anniversary of the Marco Polo Bridge Incident and the onset of the Anti-Japanese Resistance War (1937-1945). On the outskirts of Beijing at the site of the Japanese attack, observers honored the occasion by slipping through open turnstiles and toward the Marco Polo Bridge. On that span that opened the way to the bloody road to Nanjing, Chinese television reporters gingerly approached elderly passers-by, children leaped across old cobblestones, and young couples admired the architecture, far removed from the clangor of war. At the far end of the bridge, a Japanese journalist from Kyodo News Agency took photographs, speaking in careful Chinese with a colleague.

Beyond the bridge stand the pockmarked gates of an ancient fortress, shielding a new citadel, the Museum of the War of Anti-Japanese Resistance. Surrounding this immense edifice is a host of black stones etched with characters depicting Japanese atrocities. Inside the museum rests the standard fare of state recollection in the PRC: wax models of torture scenes, evidence of heroic resistance, battlefield tableaux, and spinning wheels from Yan’an, emblematic of the self-reliance of guerrilla forces of the era. Notably, these traditional icons have been supplemented by exhibitions praising Communist cooperation with the Republic of China government, indicating that unity with Taiwan is a present-day purpose that can be served by war commemorations.  Outside the museum, the highest elites of the PRC arrived with their chauffeurs – about half driving black Hondas.

That same summer, over a bowl of mutton noodles, I received congratulations from a somewhat inebriated Chinese colleague for my country’s having bombed “little Japan with the big atomic bomb.”  Since then, I have be regaled with tale after tale of Japanese atrocities from Chinese taxi drivers, but also more than a few complaints about the clear and present corruption of party officials in out-of-the-way cities like Mundanjiang.

Exceptions to the anti-Japanese rule in China are everywhere if you look hard enough.  They can be found on trains burrowing into Manchuria’s chemical fog, when you meet the descendant of a mixed race Chinese-Japanese orphan visiting from Japan.  You can meet multilingual and manga-crazy Chinese comic book artists with Japanese pseudonyms at the Goethe Institute techno party in Beijing, or commiserate with Chinese-literature-major dropouts from Qinghua University who hail from Tokyo.

I met one of the sweetest exceptions with a group of my students, as we waited for clouds to clear and for the Unit 731 Bacteriological War Crimes Museum to open outside of Harbin, a horrifying venue where Chinese were vivisected by Japanese doctors and nothing less malevolent than black plague was rekindled.  Biding our time in a KFC, we met an intensely gregarious little girl, age eight, who regaled us with her contest-perfect English.  “You’re a local,” I said to her in my best dongbeihua.  “Tell us what you think about the crimes of the Japanese devils.”  “I know nothing about it,” she said confidently in English, “but would you like to hear me recite the Gettysburg Address?”