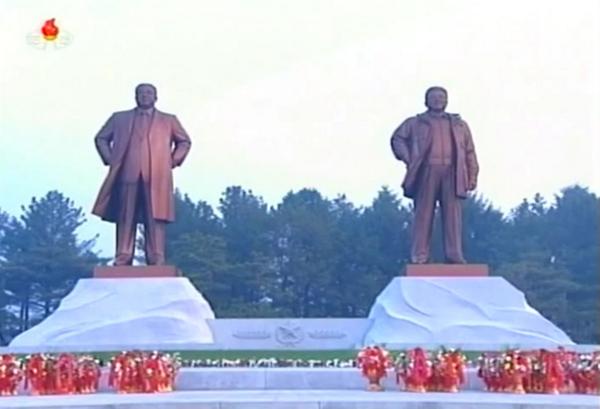 Socialist nostagia is a powerful thing in northeast Asia. Kim Jong-un — or, perhaps more correctly, the committee who writes his speeches — evinces a key understanding of this nostalgia, and has wielded it at various times. The period of state consolidation, the years from 1945-1948, are a particular touchstone for the North Korean leader. Kim Jong-un’s land reforms, put forward in June 2012, are an … END_OF_DOCUMENT_TOKEN_TO_BE_REPLACED

Manchurian Base Camp, Part I: In the 1930s Kim Il Song regarded Manchuria, or Northeast China, as an immense area into which to project anti-Japanese struggle and wherein he could hammer out the personal foundations for what would become the North Korean state.   Manchurian Base Camp, Part II: During the Korean War, North Korean elites moved back into Manchuria to escape from the horrific bombing … END_OF_DOCUMENT_TOKEN_TO_BE_REPLACED

Although no one seems to be writing about the topic, Kim Il Sung’s life and works are likely to play an important role in justifying any new direction taken in North Korea, just as the present order, just as that life and those works undergird the present order even as the constant public reminders of that early era kindle a certain revolutionary nostalgia in the … END_OF_DOCUMENT_TOKEN_TO_BE_REPLACED

Note: I’m breaking slightly from my previously-announced fortnight blogging hiatus to try something new: a sort of collection of links on North Korea and Sino-North Korean relations which attempts to combine the advantages of Twitter while removing the fragmentary nature of that platform. (You can subscribe to my Twitter feed here.)  I certainly intend to continue with the production of monumental blocks of prose that … END_OF_DOCUMENT_TOKEN_TO_BE_REPLACED

Kim Jong Il biographers appear to be conflicted about the young man’s whereabouts in the year 1960.  Was the nineteen-year-old future leader traveling around the German Democratic Republic, or was he getting things rolling at the university in Pyongyang which still bears his father’s name?  Or perhaps both?  His official biography, in any case, has him firmly at Kim Il Sung University. I don’t have … END_OF_DOCUMENT_TOKEN_TO_BE_REPLACED

I recommend you watch how these stories develop, since most of them have yet to be really reported in the Anglophone press: 1. Legacies of Japanese imperialism in Manchuria Chinese government organizations and affiliated NGOs are engaged in a struggle to get the old Unit 731 facility (the commemorative site for Japanese biological weapons research and atrocities outside of northeastern city of Harbin) listed as … END_OF_DOCUMENT_TOKEN_TO_BE_REPLACED

Yesterday I ordered and got into my hands a pile of letters from Kim Il Song to the East German leaders from 1955-56. The man has a quirky signature, and his typewriter is epic, leaving little corona of ink around each hangul.  It was nice to finally find the great anti-Japanese guerrilla himself on paper. North Koreans arriving in Berlin, 1952 Finally, on North Korea’s … END_OF_DOCUMENT_TOKEN_TO_BE_REPLACED

The Huanqiu Shibao reports that North Korea has purchased more than 100 Chinese automobiles as gifts to be given by Kim Jong Il (during the three-day period that marks his father’s birthday).  According to the report, Kim spent more than 5 million US dollars on the automobiles, and plans to give them to mid-level cadre, particularly in the security sectors, who are disgruntled as a … END_OF_DOCUMENT_TOKEN_TO_BE_REPLACED

Just a few scans from a single Korean source I picked up last year in Yanbian, published in Pyongyang in 1959, the year after the Chinese People’s Volunteers left North Korea and filed back into the maelstrom of Great Leap Forward-afflicted China through Dandong, Ji’an, and Tumen. Relevant manuscripts: Adam Cathcart and Charles Kraus, “The Bonds of Brotherhood: New Evidence of Sino-North Korean Exchanges, 1950-1954,” … END_OF_DOCUMENT_TOKEN_TO_BE_REPLACED

Kim Il Song’s Works form part of the backbone of any serious student’s reading about North Korea.  Although this lengthy, often pedestrian, heavily edited, and occasionally fabricated collection runs to 40 volumes, there are still far too many gold nuggets in this slag mine to ignore.   In this short essay I want to root around in the Works briefly to excavate the foundations of a potential resurgence of anti-Chinese sentiment … END_OF_DOCUMENT_TOKEN_TO_BE_REPLACED